The Re-Mars-tered edition was released on July 3rd 2018 for PlayStation 4, Xbox One, and Microsoft Windows, with a Nintendo Switch release following on July 2nd 2019.

Red Faction: Guerrilla is a 3rd person, open-world action shooter set on Mars, set roughly 50 years after the events of the original Red Faction (around the year 2120). Players take the role of an insurgent fighter named Alec Mason with the newly re-established Red Faction movement as they battle for liberation from the oppressive Earth Defense Force (EDF - allies in the first Red Faction). Throughout their fight for freedom, players carve their own path, wreaking havoc across the vast, open-world environment of Mars, from the desolate mining outpost of Parker to the gleaming EDF capital city of Eos to the Earth-like region known as Oasis. 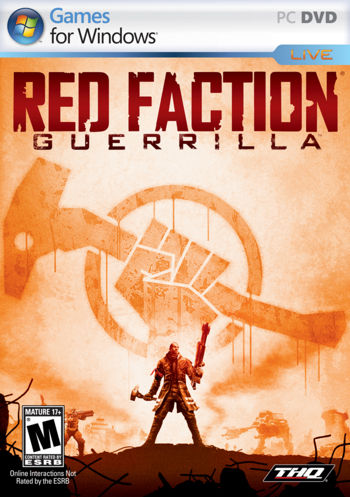 The game starts out with Alec Mason, the protagonist, landing on Mars and meeting his brother, Dan Mason. As they drive through the streets of Mars, a group of EDF cars nearly crashes into them. This starts Dan talking about all of the horrible things EDF has done to the people of Mars. As he speaks, scenes of cruelty are shown, such as death squads and beatings. When Alec and Dan arrive at their destination, an abandoned lab, they spot a gunship flying in the air. The player is then tasked with destroying the abandoned buildings while their brother keeps a lookout. As the player returns to the vehicle, the gunship returns and orders Dan to surrender, revealing that he was part of Red Faction. When Dan tries to run, the gunship shoots him and Alec. Alec survives but Dan is killed instantly. He returns to Dan's home to find that EDF has raided the house. When the soldiers see Alec they order him to drop his "weapon" (a sledgehammer). Alec is accused of being a part of the Red Faction insurgents by the commander and is placed under arrest. Despite Alec's protests of arriving today which is responded with the commander saying "I guess you work fast." And retorts that Alec had detonators for the remote charges the player used in the first game play sequence. Alec responds to being a mining engineer and having a permit for the charges, which results in the commander pushing him off and retorts once more "It just got revoked!" the commander then orders the platoon with him to shoot and kill Alec. Before he can be killed Red Faction members start engaging the soldiers. As all of soldiers fall except for the commander, Alec picks up the sledgehammer and kills the leader with it. The leader of the Red Faction walks up to Alec and tells him that whether he likes it or not, he is now part of the rebellion.

Wrecking Crew is a hot-seat multiplayer game of destruction unique to Red Faction: Guerrilla. This mode is offered as essentially single player full screen gaming, with the option to specify players and accumulate scores while taking turns playing the game.

Red Faction: Guerrilla features online multiplayer. it utilizes a matchmaking system similar to that of the Halo series. The current game modes include Demolition, Anarchy, Siege, Capture The Flag, and Team Anarchy. Before Siege and Demolition can be played, the player must achieve a certain rank.

The PC version of Red Faction: Guerrilla will not feature dedicated servers, instead clients will have to host "listen" servers.

Red Faction: Guerrilla takes place on a section of Mars called Tharsis. Tharsis is made up of 6 sectors.

In the expansion pack Demons of the Badlands there is another location Mariner Valley.

As preorder bonuses, the following items were given away at different stores around the world:

Red Faction and Red Faction II are the two previous games in this series.

Formally announced on GameTrailers TV on June 4, 2010, Red Faction: Armageddon stars Alec Mason and Samanya's grandson, Darius Mason, and takes place 50 years after the events of Guerilla. A cataclysmic event of Mars' surface has forced those above to begin life anew in the mines below. A swarm of surface-dwelling creatures have invaded the underground mine network and threaten the lives of those who live there.

In the Dust Safehouse, the radio operator can occasionaly be heard saying "Cut the chatter Freeman," This may be a possible reference to Half-Life's protaganist, Gordon Freeman. This is hinted to not only in the name Freeman, but also in that the Gordon of Half-Life does not talk.

In the EDF bases, calls for Pvt. Calhoon are made over the speaker system. This is a reference to Barney Calhoun of the HL series.

The areas Parker and Eos are named after characters from RF1.

In Eos, there is the Hendrix Memorial, as well as Hendrix Hall. Hendrix was a character who helps you (but dies) in RF1.

In Eos, there is the body and radio tag of Alias, the hero from RF2.

In Eos, there is a War Memorial statue which has a plaque. One of the names on the plaque is Bryan Adams (a singer).

In Badlands, there is an old man who constantly reminisces about the good old days, etc. Listen to him long enough and he says "They used to call me Crazy Parker". This could be Parker, the hero from RF1.

In Badlands, you will find one of the Martian Rover probes.

There's a glitch at the Dust Safehouse where if you smash the thing the guy who is lying on his back is welding then the guy gets crushed and the arm he was using to weld flies about madly.