Objects can make or break a level. The addition of objects to a level helps to provide a better reference for scale, as well as giving a level a more realistic feel. Objects are classed as any 3D thing in a level that is not made from level geometry, and there are several different categories of objects, ranging from characters to vehicles to light fixtures and weapons. Objects can be manipulated in Object Mode or Group Mode.

This page lists available object types in RED. For specifics on Object Mode in RED, see the Object Mode Overview. 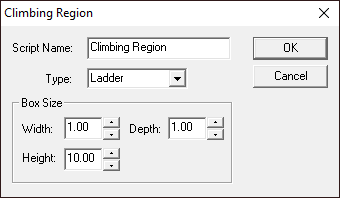 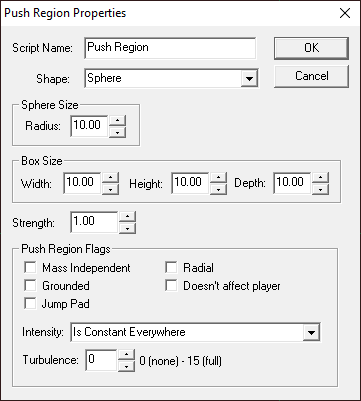 Push regions specify bounds within which the player is affected by a push force. Push regions are used for many purposes, such as simulating low gravity, creating conveyor belts, and creating jump pads. Orientation of the Push Region determines the direction of the effect (indicated by a green arrow when the region is selected). 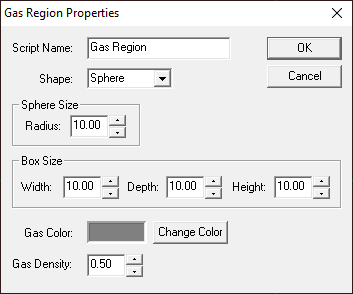 Gas Regions have no known function. It's generally assumed that they were envisioned as creating some sort of region-specific volumetric fog effect. 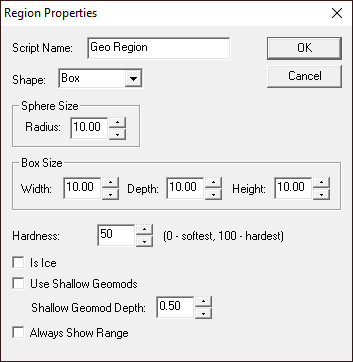 Note that Geo Regions do not stop blast craters from extending beyond the bounds of the region - the determination for what happens when a GeoMod would occur as a result of an explosion is based on the origin/source of the explosion. This means that if a rocket impacts and explodes on the very edge of a geo region, the crater will spill over and affect geometry outside of the region boundary.

Identical to Geo Region except Script Name is set to "Non-Geo Region" and hardness is set to "100" by default. 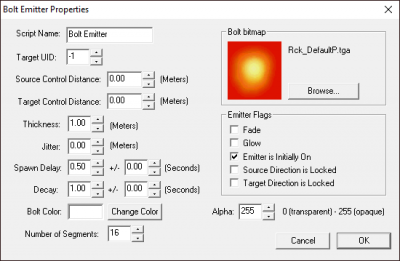 Bolt emitters draw long particles between the emitter and its target. The particles are anchored at those two points, but otherwise always face the camera. A number of settings can be used to control the behavior, appearance, and amount of particles at any given time. 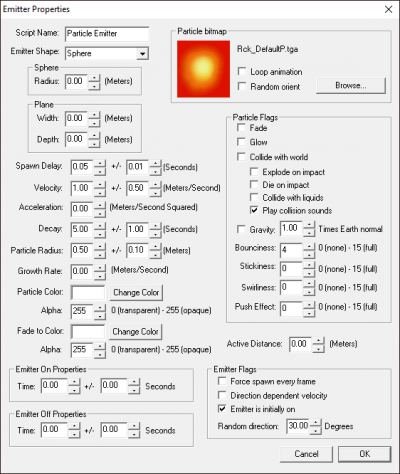 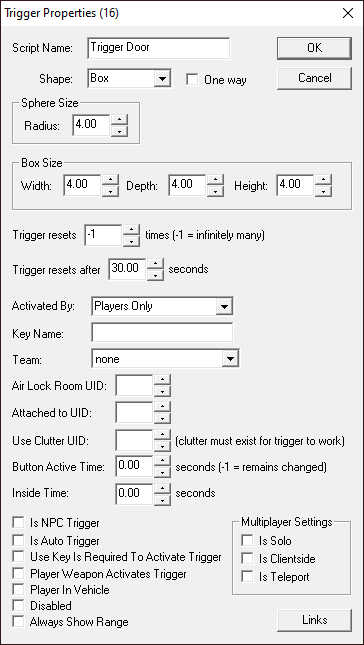 A Trigger is used to set off any number of Events or Keyframes. It could be to start a sound effect playing using a sound event, or to start a complex scripted sequence.

Additionally, the following multiplayer-only options are available in the Dash Faction and Pure Faction versions of RED.

Identical to Trigger Door except Script Name is set to "Trigger Event" by default.

Identical to Trigger Door except Script Name is set to "Trigger Auto", Shape is set to "Sphere", and Is Auto Trigger is ticked on by default.

Spawn location for players in single player games, also the location the editor cameras get set to when you hit the Home hotkey. You can only have 1 Player Start, and by default it's positioned at the world origin (0,0,0 X/Y/Z and 0,0,0 Pitch/Yaw/Roll). If you move it/rotate it, it can be tricky to get it back there. It's usually a good idea to avoid moving the Player Start at all and just build your level around it. 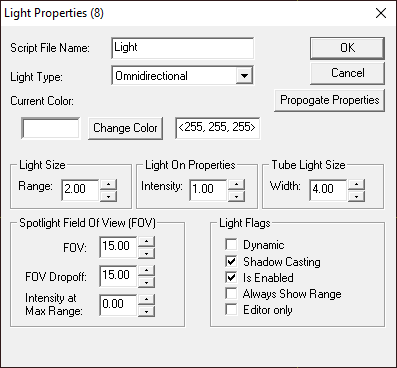 Lights provide illumination of level geometry in your map. When calculated, lightmaps are built based on the position and configuration of Lights. 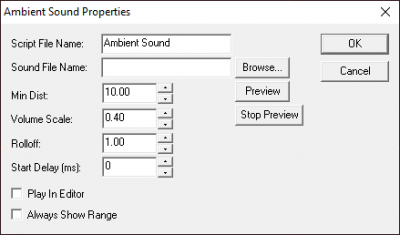 Ambient Sounds can be used to add a level of immersion to your levels. Generally, they're used to create atmosphere in specific areas - hissing in rooms with steam, generic mechanical noises in factories, echos in caverns, etc. 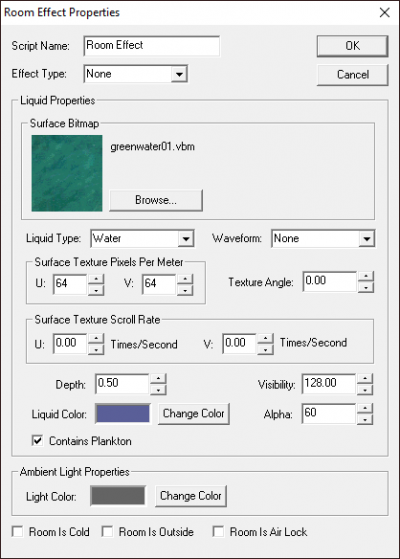 Room Effects apply to the room they're placed in, and allow the level designer to set specific properties for that room. When you create a room effect, the type is set to "None". RED has 3 usable types available for Room Effects, and each has a unique purpose.

Options that apply to all Room Effects:

EAX Effects apply to the room they're placed in, and allow the level designer to control the EAX sound effect used in that room. 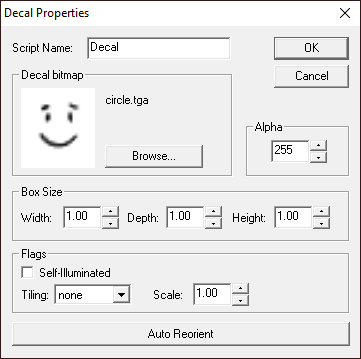 Decals project a bitmap on normal and detail geometry.

NOTE: To avoid pixel bleeding, any textures used for decals should have at minimum a 1px fully transparent border around the entire image.

Cutscene Cameras are used to specify the perspective(s) and frame(s) from which a cutscene should be played. No cutscene settings are configured directly on this object, instead those settings are configured in the Cutscene event properties. Additionally, Cutscene Camera objects are used to position the camera in multiplayer while the scoreboard is visible following a new map load, or while awaiting a new map after a game has completed.

NOTE: Cutscene Path Nodes and Cutscene cameras are the only objects with no configurable properties. 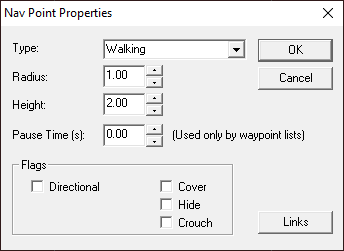 Nav points are used by entities to determine where they go (or pathfind) a level. If you don't lay down a network of nav points in your level, entities will just stand there and not be able to move around. The key to connect two nav points is the "J" key.

If you have Show Path Node Connections turned on (from the View Menu), you will see a box around the connections between the nodes. This box will be as wide as the smallest radius of the two connected nav points. The radius of a path node will soon be used for some important functions. Namely, if a nav point is too small, than an entity with a larger radius than the nav point WILL NOT USE THAT NAV POINT in finding paths. This will allow you to have humans following paths, but APCs will not try to follow. Furthermore, when you place a nav point, you are guaranteeing that the area within the nav point radius is clear of obstructions. And even more, you are guaranteeing that the box connecting the two nav points is ALSO clear of obstructions. This means that entities can walk anywhere within the nav points and anywhere within the boxes connecting the nav points, and they can't do something stupid (like walk off a ledge or get stuck on a corner) if they stay within those bounds. Adding width to our connections between nav points will keep the AI from piling on top of each other.

Here's an important restraint. Do not cross the streams. Why, you ask? Because that...would look bad. Entities will wind up following non-optimal paths if connections between nav points were to cross. When I say "cross", I mean, do not form an "X" on the ground without having a new nav point at the center of the "X".

Note that a given nav point can be used by several waypoint lists. However, if you have a pause time associated with the nav point, it will affect all waypoint lists that use it.

The event/scripting system for Red is very powerful, yet easy to use. The basic philosophy behind it is that you LINK a TRIGGER to an EVENT(s). This system is very versatile and will let you create an almost unlimited number of special scripted sequences.

An "Event" is a basic game action that occurs when it receives either an On and/or Off message. On messages can be sent from triggers, objects, or they can be received from other Events. Off messages are sent from the off state of events like the Switch Event, or are sent through an Invert Event. Most Events only respond to On messages (since most Events do a single thing which doesn’t need to be stopped with an Off message). Events must be linked to the trigger source so they know when to trigger. You link a trigger and event together by using the objects unique id number, or by just selecting the first object, then the second object, and hitting the "K" hot-key.

All Events have an optional delay associated with them, which you can specify in the Event properties (CTRL-P or by right clicking over the selected event and selecting "Properties" from the pop-up menu). This will delay the action of the event by the specified amount of time, after an On or Off message is received.

Events can link to other objects, which is used to tell the Event which objects to affect. Each Event affects their linked objects in different ways, so refer to the Event list below for a detailed description of each event. The link HAS to go from the event to the object for it to work- even if the object is being used at the "trigger"! 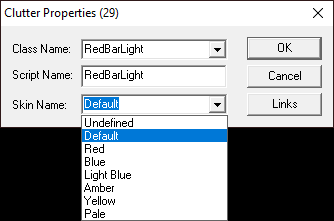 NOTE: (*) indicates that the listed class is supported in the base game, but the mesh is missing. You must be using the Dash Faction version of RED to place these classes, as Dash Faction includes the required assets to allow them to work as intended. The 6 clutter classes to which this applies are: icicle1, icicle2, icicle3, icicle4, icicle5, Oil Drum Fire.

NOTE: There are a number of classes that are selectable from this dropdown that are not listed in the tree view - this is because the mesh referenced for them is missing from the game files. You should be careful not to use these as they may cause issues. If you do set one and hit "OK", your object will disappear. If this happens, select it using the Select Object tool in order to access its properties or delete it. 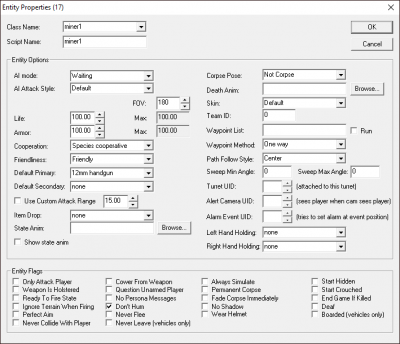 Entities include all characters, vehicles, turrets, and cameras in the game. 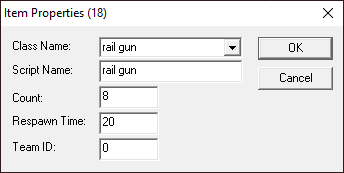 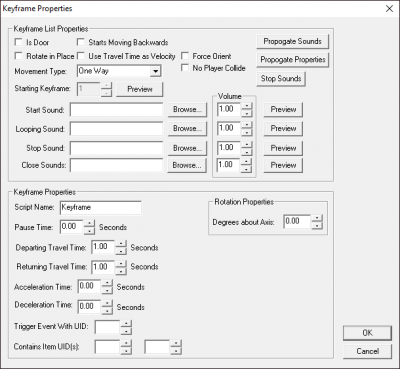 The editor uses keyframes as the method for animating how moving groups move. They are a way to tell the game engine where the mover should go and in what order. You also use the keyframes to tell the mover how fast to go to the next keyframe, if the mover should reverse or start the process over when it finishes, and other such information.