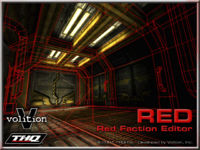 RED is the Red Faction Level Editor. RED is usually assumed to mean "Red EDitor". Internally, RED is called DED. Given Red Faction was effectively built from the ashes of the abandoned Descent 4 project, it's safe to assume DED was to be the name of the Descent 4 editor.

Levels in Red Faction are comprised of a mixture of BSP brushes and objects. .rfl is the extension used for Red Faction levels.